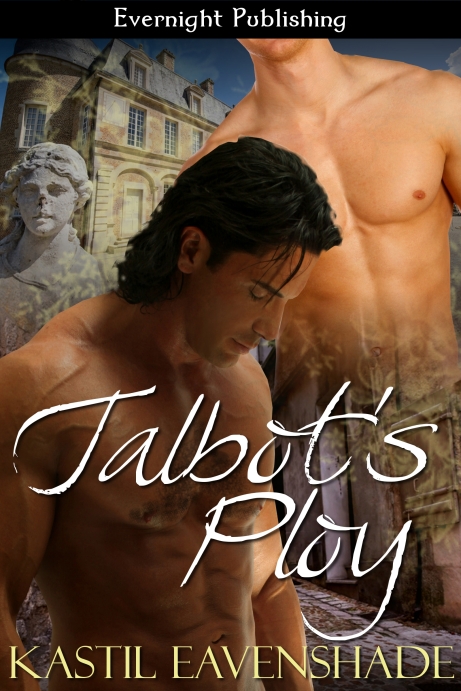 Kastil Eavenshade is my special guest today, here to tell you about her latest release, which is ALREADY a bestseller at All Romance eBooks. Take it away, Kastil!

Oh, Lila, how I appreciate you opening your blog wide so my release can slip on in.

Today I bring the tale of a naughty Lord who lives in 18th century France. Talbot, debauchery is thy middle name. Not even the most wicked can hold off love forever. I created this character in hopes to tell his story for an anthology. Talbot wouldn’t have any part of that, the attention whore he is. So I wrote…and wrote some more…just a little bit more. He came to life, in more ways than one.
I have a lot of characters that grow on me and Talbot did that. I enjoyed writing his tale and look forward to writing many more. Please enjoy the small sampling I bring today.

Talbot Sauvageot has kept his wicked lifestyle underground for several years, going from one lover to the next. Decedent rake to females by day, passionate lover for his latest male companion at night. When he is forced to flee Paris or face the guillotine, Talbot realizes none of the men he has bedded over the past years burns at his soul like his dear friend Maxime LaRue.

Forced into seclusion in the forest of Bois de Lunor, he receives an invitation from Maxime for their yearly gathering at his estate in Varanguebec. One that Talbot has avoided the past few years. Refusing to submit to a life without love, Talbot schemes to discover if his childhood friend shares the same taste in pleasure as he.
Will Maxime submit to Talbot’s ploy or cast his friend in the shadow of death?

“What you do is forbidden,” Monsieur Beaumont said.

“Then by all means go and find the magistrate to arrest us for I intend to fuck this night.” Again Talbot suckled at Maxime’s throat, the touch on his shaft more urgent. “We have already been disturbed once by a couple of brigands running through here.”

“Fils de salope. Which way did they go?”

Talbot growled low. “Will you leave if I say and naught speak a word of what you have seen?” Talbot’s last words were clipped on the edge of impatience.

“They ran off that way.” Talbot’s fingers left Maxime’s cock cold and exposed for a moment before his friend grasped his cock again.

The rustling of the leaves along the ground faded away from Maxime’s ears. His heart pounded in his chest, caught between Talbot’s wicked ministrations and Monsieur Beaumont’s rage.

“Fool,” Talbot muttered before tugging Maxime’s shirt open. He bent and flicked his tongue along the nipple and Maxime hissed.

“Is he not gone?” Maxime whispered.

“Non. He lingers like a sinful man.” Talbot chuckled and bellowed out to the forest around him. “Perhaps you like what you see and wish me to fuck you as well?”

The two friends sniggered when the heavy gallop of a horse faded into the night. Maxime breathed a sigh of relief and glanced at his good friend. Talbot had not stopped his slow tease of Maxime’s cock and buried his head in his chest.

“Non. Do you not remember our misspent younger days?”

Maxime tensed as the tug of his cock increased. He and Talbot had experimented on many levels when they were mere boys. After a few bottles of wine when Maxime’s dad had left on estate affairs, they had found decadent pleasures between the sheets but nothing beyond a gentle stroke. As they grew older, they turned their attention to the females vying for their affections. Maxime had forgotten it and blamed it on his curiosity along with the comfort it brought him after his mother’s sudden death.

“That was a long time ago, my friend. It is not necessary.”

“Oui, it is. My cock found pleasure buried in the sheath of the exquisite Jacinthe Beaumont. Had I known her sister would not offer herself to the handsome Maxime Jean de Valette, visconte de LaRue, I would have shared Jacinthe with you. You are my only friend in this world.”

“Madly so.” Talbot flashed a wicked smile before he dropped to his knees. Maxime snatched his friend’s hair, intent on jerking his head away from his erection but as lips met the shaft, his breath hitched. The beauty of Talbot’s darting tongue and hand working his phallus could not be denied. He gripped his deviant companion’s head and forced more of his cock into his mouth. Many women had tasted his girth but none made him shatter as Talbot did. He throbbed with need to release but steeled himself for a few more forceful pumps into his friend’s greedy mouth. The thought of his seed mingling with the wine of the bottle and of Jacinthe made him lose his control. He cried out into the still night as he sprayed the back of his friend’s throat.

One free ebook copy for one random but still oh so lovely (or dashing) commenter, so be a dear and please leave one. Make sure Lila and I have a way to contact you. Entry period ends August 10th at 11:59 PM Pacific.

Screw the torturously slow giveaway if you can’t wait, and buy here:

Blog-o-rama Tour of Decadence™
Evernight Publishing (For a limited time, save 15%)
Amazon
All Romance eBooks
Bookstrand