This is the third six from my Naughty Fairy Tale coming June 26th, Tuesday!!, from Evernight Publishing entitled Vixen and the Pea.

Based loosely on The Princess and the Pea, Prince Koldo is being forced by his parents to choose a bride and settle down. They favor a match with Lady Otsana Tixier. Neither Koldo nor the lady herself, however, are keen on the idea. Both have been donning disguises and sowing wild oats in a neighboring kingdom, Otsana as Fleur and Koldo as Bero. Free of the head covering and heavy veils worn by the maidens of the court, Fleur’s identity as Otsana is secure for the time being.

In this scene, Otsana / Fleur is on her way to her second meeting with Koldo / Bero. She’s not the least bit crazy about him. No siree, no way, no how. 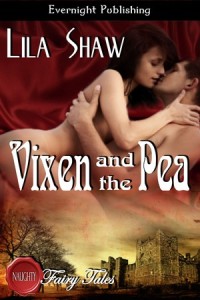 She had waivered so many times about keeping their rendezvous, especially after striking His Highness in the crotch with her knee. The decision to come had been settled upon when she reminded herself that Fleur craved the touch of the maddening prince, not Otsana. Fleur was the one who fled as if afire on horseback, disguised as a boy until she reached the village and rented a room of her own. Fleur was the one who bathed with lilac and honeysuckle to rid her skin of the scents of horse and sweat. Fleur donned the sexy clothing of a courtesan and after attending to her pessary, dashed off to meet her lover.

A single rap, then a double, per his instructions.

Be sure to also check out the host site, Six Sentence Sunday, for links to more snippets from some very talented writers.